While spending 1884 to 1891 in South Dakota, Dietrich HUMBKE and family: 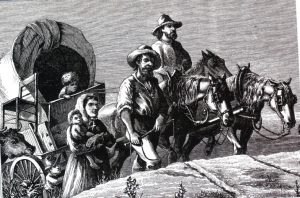 The family (now 8) moved by wagon, herding their animals 252 miles directly East to Buffalo Center, Iowa and then another 15 miles South. Their new home was 80 acres of the SW Quarter of Section 32, Township 9, North of Range 26, West of the 5th Meridian in Winnebago County, Iowa.

Site of HUMBKE Farm Home in Iowa in 1999. Today (2016) only continuous fields of corn and other crops remain. It is easy to goggle the Farm’s location; the Lutheran Church and Cemetery; Woden; and Titonka.

My trip in 1999 to South Dakota & Iowa with common-in-law wife Dorothy and Tabitha, Kelly and Cletus (Quintal)

In July of 1999, I finally found the German Lutheran cemetery where my great grand father Dietrich HUMBKE was buried. I arrived the day after the congregation and community had celebrated the 100th anniversary of the building of the German Evangelical Lutheran Immanuel Church. 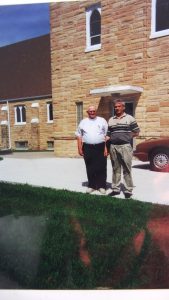 We were warmly welcomed by the Minister as the first descendants (of the HUMBKE family that had left 98 years ago) to return to visit the church cemetery. A Mrs. Roger (Neoma) BOYKEN and Debra BOYKEN provided me with the following information which describes life as it was experience by the HUMBKEs  from 1892 to 1902 in Iowa.

DESCRIPTION OF LIFE EXPERIENCED BY THE HUMBKE FAMILY IN IOWA FROM 1892 TO 1902.

“The Iowa territory was abundantly filled with all forms of wild game. By 1892 the buffalo  had

nearly been exterminated in Iowa, but wild fowl were in supply in marshy areas. The settlers had easy hunting of game and fishing in the  rivers and lakes.”

“The German farmers brought the true spirit of the pioneers with them. They had a knowledge of hard work and the desire for the possession of property and home. They were God fearing, industrious people and their efforts have been blessed with many future successes.”

“Once the German farmer had his sod house in place to shelter his family and some form of shelter for his animals he could begin work on his fields.”

“In the spring he either broke the sod by hand or used a walking plow pulled by either a team of oxen or stout horses. The virgin soil sometimes had numerous large rocks that had to be remove by hand or with the use of the animals again.”

“When planting time came holes were chopped in the sod with an ax and seeds were dropped in one at a time. Cultivation was done with a hoe by hand or with a one row single shovel walking plows.”

“Harvesting time was again done by hand with the help of the entire family and neighbors. Corn was picked one ear at a time and husked the same way. The wheat and straw were cut with a scythe, then raked and bound by hand into bundles to be later picked up and pitched onto wagons.”

“When wood for fuel was scarce they sometimes twisted hay into small bundles for fuel. Butter was churned and cream was separated for various other uses. Women made the laundry soap and entertained the children with taffy pulls.”

“Cooking was done over open fires until the cookstoves could be installed in the houses.”

“During the winter months the men whittled out wooden pegs for there use as nails for the buildings to be built. Harnesses were made and mended during the winter. The children often attended a one room schoolhouse where they were all taught by one teacher.”

“During the spring, when travel became possible again, the wheels of their lumber wagons often had to be dug out of the mud. The wheels had to be cleaned out each time.”

“Sometimes when the summer’s hot, dry days came, water was hauled from as far away as seven miles”.

The photos were taken in July of 1999. If you  goggle the location  you can clearly see the Church and Cemetery, but there is no longer any trace of where the Humbke family home and  buildings were.

There was much more rain at their new home (to the extent that hoof root of cows was common), but it also resulted in great crops, more prosperous time and some money could be saved..

The marriage of Sophie, the oldest daugher of 21 years, to a good German farm boy, Henrich Conrad Conradi, on Sept. 25, 1891 had resulted in her moving to Wellsburg, Iowa (115 miles SE of Titonka, Iowa).

Musical skills run strong in the Humbke blood line and there were surely robust wedding dances for both girls. There would be the best  of food and beer at a celebration where great  fun was had by all.

As a young man man growing up in the 1950’s in a rural Wetaskiwin the height of enjoyment was attending a Saturday  night dance at a rural dance hall. Every small village had a dance hall. It was where most courting took place and one could hardly wait for the “Supper Waltz”!

The Humbke family members were devoted German Lutherans and regular church goers. They had to travel 5 miles straight West to the closest Lutheran Church in German Valley for their first 8 years in Iowa.

On January 3o, 1899 twenty one charter members (including Dietrich Humbke, his son Ernst Sr. age 32, and his son-in-law Henrick Conradi age 30) plus 100+ supporters pledged $1,020 to build a local church.

In 1899 just as everything seems to be going well for the Humbke family- (a church was being built, 2 daughters were happily married, and Ernest Sr. has been able to purchase 3 different local farms immediately South and East of the church) – tragedy struck. While hauling logs for the new church 53 year old Dietrich Humbke had a run-a-way with his horses. Dietrich fell off the wagon and died of brain injuries within the next 24 hours (July 19, 1899). 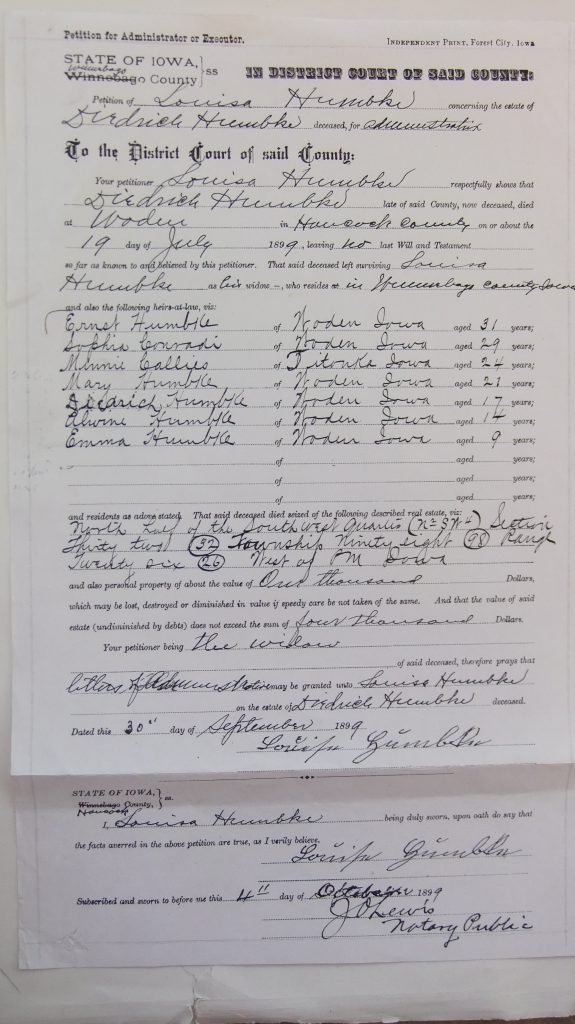 Chattle Property included 4 horses two of which were called Jerry and Prince; 6 cows of which two were called Sarah and Noudles; 20 pigs; 1 lamb, various equipment & wagons.

One can only assume the Humbke family was  grief stricken at losing their patriarch. Life continued and it was decided that Ernst Sr. would make a trip to Alberta, Canada in the summer of 1900. He would be looking for homesteads where the family could once more start a new life.

Rumor has it that Ernst Sr. joined up with an Indian Band East of Edmonton, Alberta and went South to the Battle River Valley where he found suitable homesteads available.

He returned to Woden and in March of 1901 with his mother, Louise, brother Dietrich, sisters Mary Alvina and Emma, plus  Carl & Minnie Callies with their 2 year old son (Herman) left Woden for Wetaskiwin, Alberta, Canada.

Henrich and Sophia Conradi had 2 children by this time – Conrad 8 yrs. and Louise 5 yrs. Their first son, Henry, had died at 20 days old.  Henrich and Sophia had their own farm across the road from the Humbke farm and are both buried in the same cemetery as Sophia’s dad, Diedrich Humbke,

The next 2 blogs will be about Ernest Sr.’s  life in Iowa;  and Henrich and Sophia Conradi.

Please point out any spelling mistakes or other errors in order that I may correct them. I have edited the first 3 blogs once again in an attempt to correct grammar and factual mistakes. My biggest challenge is to make the photos as clear  as possible and all documents readable. Please assist me by way of suggestions. Right now I am taking photos of photos and documents and uploading them to this site in digital form. Perhaps I need a better camera!

The general layout on my desk monitor looks not too bad, but I am scared to look at what appears on an iphone. I understand that is very quickly becoming the main way individuals access the internet.  Any suggestions?

Another challenge I need help with is research. My personal knowledge of Carl & Minnie Callies and their descendents is very limited. All I have is a document showing that Ernest Sr. and Carl  jointly signed a $2,000 bond guaranteeing that Louisa would carry out her duties as executor of the estate, before she could leave Iowa.