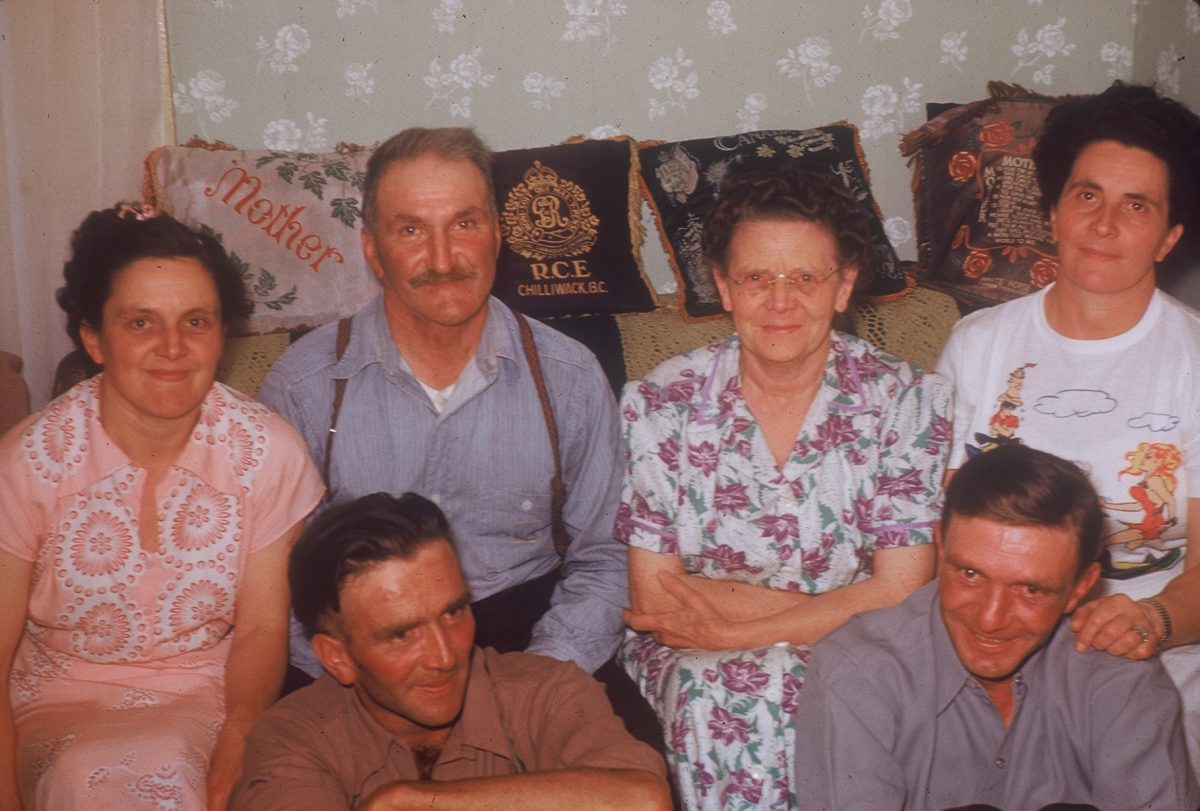 Her parents, Ernest Dietrich Christian & Marie Louise (SCHNEPEL) HUMBKE plus four children left their home village of Windheim, Germany for Bremen, Germany where on July 25 1883 they boarded the S.S. Neckar steam/sail bound for New York. The lack of farm land for the family’s two boys, the lure of cheap homestead in the new world, and conscription of all men in Germany up to age 50, were three of the main reason the family immigrate to the USA. Dietrich‘s younger brother, Chris, and his eldest son, Ernst Sr., were already in South Dakota, USA. 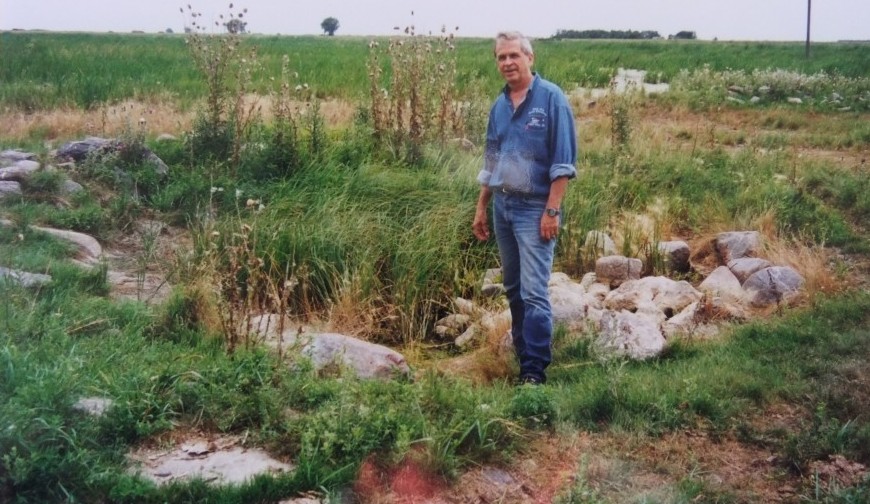 The family made a stop in Buffalo Center, Iowa for a year, but in 1884 proceeded to South Dakota where they filed on a homestead SE of White Lake, and SW of Plankinton in Aurora County. One year later on 14APR1885 Alvina Maria Sophia Louise HUMBKE  was born in a sod house on the family  homestead – an absolutely, table flat, grass covered piece of land.  She would be the first HUMBKE to be born in North America – a citizen of the United States by birth.  Life  in South Dakota was very difficult, to say the least, and the family sold the homestead and moved in 1891, by covered wagon and horses, to  Iowa a farm, NE of Titonka and NW of Woden. 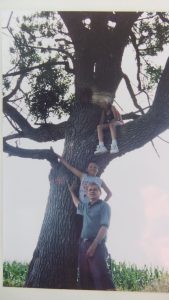 a new 2 story home constructed of lumber on the 80 acre family farm NW of Woden, Iowa. Whereas South Dakota had been in a drought for 7 years; in Iowa it was so wet the cattle suffered from foot root, but corn did grow 8 ft. high and life was much better. In Iowa, Alvina would see her two older sister marry, and become an aunt to two nephews and a niece. It was looking like the HUMBKE family would be settling down permanently when life took one of  those unexpected turns.​

​Her eldest sister, Sophie, had married Henrich Conrad CONRADI Sep. 25, 1891 and moved to Wellsburg, Iowa where they had 3 children and farmed. In 1899 Henrich and Sophie would buy land near Titonka/Woden from her brother, Ernest Sr., and move to their new farm across the road from where her parents lived.​ Sophie is buried in the cemetery wher​e her father was interred in 1899.​

Alvina’s other older sister, Minnie​, married a German entrepreneur (25 year old Charles Ludwig CALLIES) on Jan 19, 1898. They would have a son in 1899 and immigrate to Canada with the Humbke family in 1901, ​leaving 2 sons and 3 daughters living on the family farm with their parents..

Her eldest brother, Ernst Sr. had bought 2 quarters of land in Iowa and given 3 acres for the construction of a German Luthern Church in the country side just 1/2 mile West of  his father’s farm. 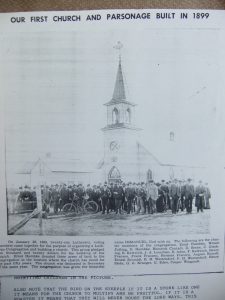 At that time the family lived close togeather on productive farms and it appeared that they would remain in Iowa. ​Ernst, his son (Ernst Sr.​​) and his son-in-law (Charles CALLIES) were very strong Lutherans  and members of the church founding committee​.

On July 21, 1999 while hauling logs to build the church Alvina‘s father, age 54, was killed when his horses had a run-a-way.

Ernst Dietrich Christian HUMBKE had been patriarch of the HUMBKE family and his death seemed to follow the tragic deaths of both his mother (age 47 yrs)  and father (45 yrs) on Nov. 6, 1886 when Ernst Sr. was 21 years of age. Cause of their deaths was probably suicide or a tragic fire.

Now his oldest son, Ernst Sr. would lead the HUMBKE family to 3 homesteads 14 miles West of Wetaskiwin, Alberta, Canada where they would become Canadian citizens and remain for the rest of their lives.

Alvina, age 15, arrives in Wetaskiwin aboard the first passenger train

between Calgary and Edmonton, Alberta, spends the night at the Alberta Hotel and the next day the family sets out using a horse pulled wagon loaded with their belongings. They travelled  10 miles SE, crossed the Battle River at Carpenter Crossing and proceed 6 miles NE to the families three homesteads where the men await their arrival.

Alvina will celebrate her 16th birthday on her mother’s homestead on April 14th and spend her next 4.5 years  toiling to help her mother and family break the land and establish a life on the desolate prairie. There is no record of Alvina or her siblings (except for Emma – Grades 1 to 5  New Berlin/Verdun School, Alberta) ever attending school in Germany, South Dakota, Iowa or Alberta. 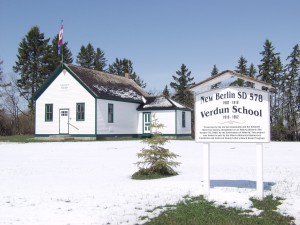 Alvina would later learn to read and write English as a result of helping her 5 children with their homework while they attended the newly named Verdun School.

The Humbke family quickly expanded and before Alvina left the homestead in December 1905 her older brother and sister would marry, move to their homesteads and have children. Her oldest brother Ernest Sr. would marry Mary Westenfeld from Germany on May 22, 1902 and niece Erna Louise would be born July 19, 1903.

Elder sister, Mary, married Joe GEORGE on June 8, 1903 and they moved to his farm in the Hauletain District where nephew Earl (a leap year baby) would arrive on Feb. 29, 1904.

Now only sisters, Alvina and Emma, plus brother Dick are left 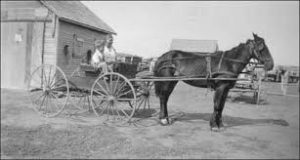 at the homestead with their Mother, Mary. At this time the horse was the most necessary animal on farms and they  outnumbered humans, reaching their peak in 1920. Their care, feeding and use involved all members of the family.

Dave, b. 28MAY 1885, was the youngest of 9 children born to Davidicus John FONTAINE, b. OCT1843, Quebec, Canada and Angeline (PARENT) FONTAINE, b. DEC1839 in Quebec, Canada. The family  immigrate to the USA in 1867 where 9 children were born  and appear on the 1900 USA Census as living in Rudolph, Wood County, Wisconsin.

In 1901 the family, with boys Albert Joseph, Frank and Dave, emigrated from Wisconsin to Alberta, Canada and spent a short time in the Duhamel region before Dave moved to the Rosalind District and filed on a homestead. At the same time Davidicus (John) and his son Delphinus (Dave) built a ferry at Gwynne and floated it down the Battle River through Dried Meat Lake  and on to Ferry Point where they ran a ferry service for a number of years.

In Dave’s travels his paths often crossed with those of 20 year old Alvina Humbke and on Dec. 20, 1905  they were married in the Swedish Lutheran Church,  Wetaskiwin. Dick HUMBKE (brother of the bride) and Hulda WICKLAND (future sister-in-law of the bride) were the witnesses. 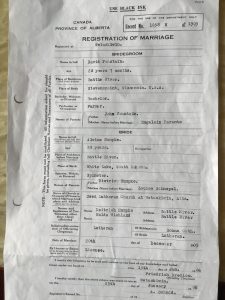 The REGISTRATION OF MARRIAGE reads: 20DEC1905 Alwine HUMPKE, age 20 married Dave FOUNTAINE in the Swedish Lutheran Church at Wetaskiwin. According to the records, Clergyman Friedrich BREDLOW officiated, and her brother Deitrich HUMPKE and his future wife, Hulda WICHLAND were witnesses.

Please note that the names of the bride, groom and witnesses were all misspelled. I have heard  the family named pronounced and spelled so often as Fountaine, Fontain and Fontaine  that at one time I thought that George and Wilfred Fontaine families were not related. Since studying the family tree I have come to realize that there are a large number of Fontaine Families in the Counties of Wetaskiwin and Camrose, and that they are all originate from the Davidicus & Angeline (PARENT) FONTAINE family.

Dave was to remain a Roman Catholic for his life, while Alvina and the children would be Lutheran.

They spent their first 3 years on a farm in the Rosalind area where the family ran the Ferry Point Ferry and had their first of five children. 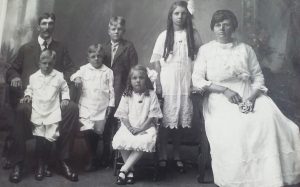 They moved back to the New Berlin School District of Duhamel in 1908 and lived with Alvina‘s mother on the original homestead until retiring to Wetaskiwin in the early 1930’s after the death of Alvina’s mother. The Fontaine family would increase to seven with the addition of another son, a daughter and twin boys. All five children would attend the New Berlin/Verdun one room school 2 1/2 miles from home so the horse a carriage would be well used over the years. 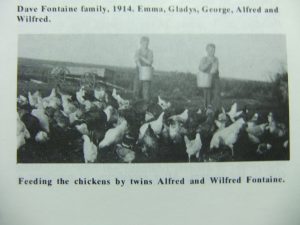 Dave Fontaine was a very happy-go-lucky man, active in the community (school trustee) and an avid sportsman. He swan, skated and especially enjoyed training his dogs for hunting coyotes. Whenever a dance, card party, church service or any 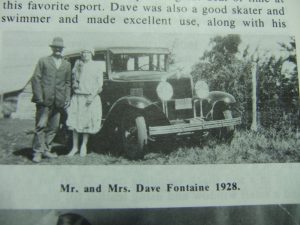 social event was held at the New Berlin/Verdun School you could be sure that Dave and Alvina would be in attendance.

Dave’s skill with the fiddle was well known and he played for many dances far and wide. Sometimes Alvina would accompany him with her dancing man on a board, entertaining at home and get togethers.

For an idea of what Alvina could do with her dancing man click your mouse on the title above the picture below.

Dave’s passion was passed on to his family. This video is my impression of what a gathering of the Fontaine Families in the the 1940’s and 50’s would have look like.  Click on either title to play. https://www.youtube.com/watch?time_continue=375&v=cs2j8f7H2WY

“While the health of Mrs. Fontaine was not too good she found time to prepare the meals and clothes for her family. She canned great quantities of berries and fruit gathered in the fall and in preparation for the long winter months. Mrs. Fontaine was a dedicate mother teaching her girls to knit, crochet and sew, and to become proficient housekeepers. In the evenings she would read stories to her children with the allocation of a certain number of chapters each night. The children loved this pastime and looked forward to this special attention given to them”.                            Taken from a local history book –  author unkown.

According to a granddaughter, Alvina was a very kind, loving grandmother who was was the brains of the family and kept it on an even keel.

Alvina had scarlet fever as a child and was not in the best of health, but that did not stop her from enjoying life and looking after her family. When her mother, Mary, passed in on Nov. 24, 1930 she left the homestead to her youngest two daughters (Alvina and Emma). Wilfred would marry Clara Nygaard 19MAR1933 and take over the family homestead, while Dave and Alvina retired to their house  at 40 Avenue and Main St. in Wetaskiwin.

In 1952 they would sell that home and move to a small house in Wetaskiwin where they lived until 1955 when Alvina passed away from heart condition and hypertension 07MAY1935. Alfred and Marjorie Fontaine would look after Dave for a year after which he lived in a Lutheran Seniors Home in Wetaskiwin until his passing on 06JAN1970.

Last Will And Testament 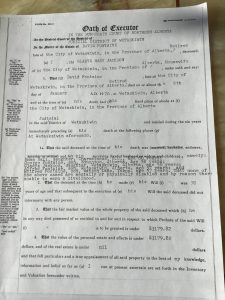 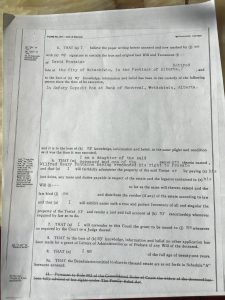 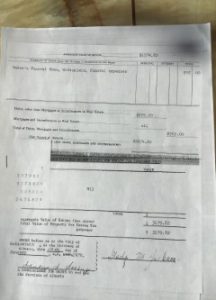 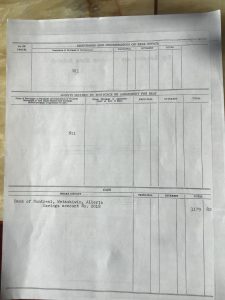 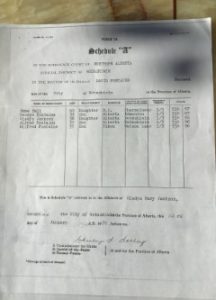 When I started researching and writing this blog I knew very little about the Fontaine Family. As a matter of fact I thought as a boy in school that there was a Fountain family and another unrelated Fontaine Family. It did not help that official documents could be found using either one spelling or the other.

I have seen Gloria and Gladys (FONTAIN) MOWAT at Verdun School yearly reunions, but have not seen another Fountain for at least 60 years. I had fond memories of Curtiss Fontaine and was researching how to reconnect, when I was shocked to hear that he had very recently passed away while attending the funeral of Louie Hazelwood.

It has prompted me to make more time to visit with relatives that I have rarely or never met in the past. Researching fanilies and their relationship with closer relatives has been a thrilling adventure.

On another note as a result of visiting cemeteries. I would like to do something to fix the older sunken graves and making inscription readable once again. Perhaps a nonprofit organization could be formed to handle the problem and we could raise some money to ensure that our ancestors are not forgotten. Please send me your thoughts if you are interested.